ThiruNarayanapuram is referred to as ‘Dakshina Badri’

Located about 35kms North East of Srirangapatna on the banks of the Cauvery in the Pandavapura Taluk-Mandya District of Karnataka at the foot of the Yadava Giri is one of the most sacred and historical Vaishnavite temples – the Thiru Narayana Perumal Koil in ThiruNarayanapuram (now Melkote), one that dates back to the Kretha Yugam. Brahma’s sons Sanatkumaras brought their father’s pooja arca vigraham ‘Lord Narayana’ and installed it at Melkote.

An interesting feature at the Thiru Narayanan temple is that there is a separate sannidhi for the Utsava deity, ‘Selva Pillai’ (Sampath Kumaran) not seen anywhere else. Only one day in the year, are both Moolavar and Utsavar deities seen together at this temple to celebrate the home coming of Selva Pillai Sampath Kumaran(Photograph below) 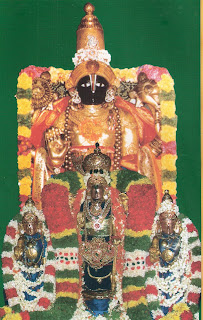 The Story- Ramanuja consecrates the temple
Driven out of Srirangam by the chozhas, Ramanuja came to a place called Thondanur (Bhaktha Puri) near ThiruNarayanapuram.The daughter of the Jain King Bitta Deva, who was ruling the region with Thondanur as his headquarters, had developed a disease. Using his powers, Ramanuja cured the king’s daughter.

Later, Ramanuja found him self short of Thiruman. That day Lord Narayanan appeared in his dreams and informed him that he was residing in a pit in a hill nearby and that the Thiruman he is looking for can also be found there.

With the help of Bitta Deva, Ramanuja came to Thiru Narayanapuram and located the moolavar lord and performed consecration of the temple.

Story 1 of the Utsava deity as Rama Priyan
After Lord Rama had given his pooja vigraham, Ranganatha, to the newly crowned Lankan King Vibheeshana, he was left without an arca moorthi for his daily poojas. Brahmma is said to have provided this arca vigraham to Rama. Later, Rama passed this on to his sons Luva and Kusha. When Kusha’s daughter got married to a Yadava prince, this arca moorthy was given as part of the gifts to be given by the Bride and thus this vigraham landed up in the lunar dynasty from the solar dynasty.

Years later, when Balarama came to this place on a religious trip, he found the moolavar deity resembling the vigraham at his home, back in Dwaraka. Krishna and Balarama came back to this place with the vigraham and they decided that this was the ideal Utsava deity for Thiru Narayanan and placed it here. The Utsava deity having been Rama’s aaradhana moorthi and was called ‘Rama Priyan’.

Story 2 of Rama Priyan becoming Selva Pillai
Coming back to Ramanuja, while he was happy to have found the moolavar deity of Thiru Narayanan, Emberumaanar was keen to have regular festivals at this temple round the year. However, he found he could not do this as there was no Utsava deity.

Once again, the Lord came in his dreams and suggested that his utsava moorthy was now under the custody of a sultan king. Immediately, Ramanuja approached the king briefing him of the situation at the temple. The king asked Ramanuja to identify his arca vigraham amongst the many that the king had taken custody of. Unable to find his Lord, Ramanuja spent the night there. The next morning he called out ‘Adiyen Vareeren Enthan Selva Pillai’ and like a small child, the lord ran up to Ramanuja, from the chamber of the princess, and sat on his lap.

Delighted at finding the processional deity, Ramanuja brought the Lord back to Thiru Narayanapuram. With the Lord having reacted to Ramanuja’s call of ‘Selva Pillai’, the name stuck and from that day, Rama Priyan came to be called ‘Selva Pillai. Unhappy at the departure of her favourite Lord, the princess followed suit and joined Selva Pillai at Melkote and she is said to have remained there ever after serving at the feet of the Lord.

Having found the Utsava deity, Ramanuja stayed here for 12 years and set up processes for daily poojas, rituals and annual festivals. 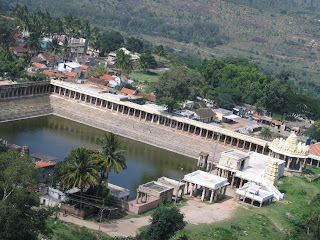 One day, when he was performing his pooja at Kalyani pushkarani, he heard the news of the death of the chozha king and decided that it was time for him to head back to Srirangam. He brought 52 Bhattars (Aivattiruvar) from Srirangam (tiruvellarai) to perform the daily poojas at this temple.

Unhappy on hearing the news of his proposed departure from Melkote, the people for whom he was so dear, wanted him to stay back.

As an alternate, Ramanuja created a bronze image of his and left this behind with a request asking them to always take care of his beloved ’Selva Pillai’. Ramanuja is seen here with an ‘Ugantha Thirumeni’ 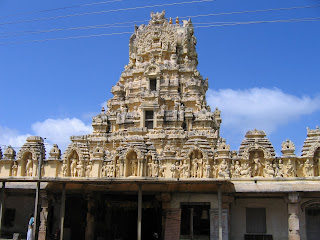 Over the last 1000 years, Vijayanagara kings, the Hoysalas and more recently the Wodeyar dynasty have made significant contributions to this temple.

The ThiruNarayanan Temple is also referred to as the ‘Dakshina Badri’. A reference to this is found in 12 chapters under the topic Yadava Giri Mahatmiyam in the Narada Puranam.

One of the four Swayambu Kshetrams

ThiruNarayanapuram in Melkote is one of the four famous Swayambu Kshetrams, the others being Srirangam, Kanchipuram and Tirupathi.

Araiyar Sevai
One of the other highlights at this temple is the continued performance of the Araiyar Sevai, an artistic song and dance enactment of the Naalayira Divya Prabandham. This is one of the four Vishnu temples in India where Araiyar Sevai is still performed, the others being Srirangam, Srivilliputhur and Azhvaaar Thirunagari.

Archakas of Melkote
A special mention must be made of the archakas of ThiruNarayana Perumal temple. In these days of short cuts every where, these Bhattars follow every pooja ritual with a commitment that is sublime. 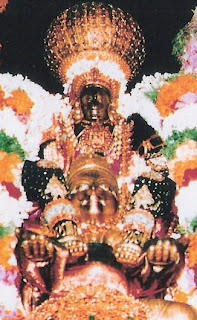 Vaira Mudi Festival in the Tamil Calendar month of Panguni is the most important festival at this temple and attracts several thousand devotees. On the 6th day of the Brahmotsavam, Selva Pillai is adorned with a diamond crown and taken on a street procession.

Ashta Theertotsavam during Raja Mudi Brahmotsavam in Karthigai is another popular festival. 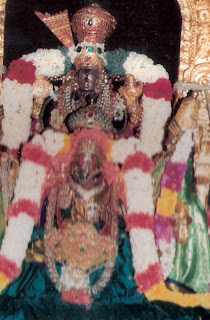 Krishnaraja Thirunaal (9days), Aadi Pooram (for Thaayar)are a few of the other important utsavams at the ThiruNarayanan temple in Melkote.

Prarthana Sthalam
Childless couples who bathe in the Kalyani Pushkarani for 8 days and offer sincere prayers to ThiruNarayanan are said to be blessed with a child.

Take 6222 Chennai Mysore Kaveri Express, Get down at Pandava Pura (715am arrival)
Take Tumkur bound bus and get down at Jakkanahalli junction (about 15kms from Pandava Pura)

Auto from Jakkanahalli to Melkote temple (about 5kms) are available.

One can reach Melkote in 2 hours from Bangalore ( about 135kms) via Mandya- Jakkanahalli.