Located about 30kms from Coimbatore on the Mettupalayam Highway is the Swayambu Ranganatha temple in Karamadai set in the backdrop of the blue mountain. Karikala Chozhan and Mysore King Krishnaraja Wodeyar are said to have made contributions to the temple. Thirumalai Nayakkar built the temple walls and several mandapams in and around the temple.Railway Line and the temple
A British engineer wanted to construct a railway line near this temple that would have caused inconvenience to the temple and its festivals. Pleased with the sincere prayers of the devotees, Lord Ranganatha is said to have come, in a white horse, in the dreams of the British engineer, who then is said to have changed the direction of the railway line. 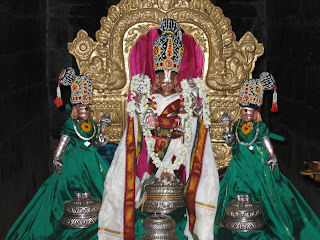 The happy British engineer donated a wooden white horse to the temple. To this day, the utsavar deity takes the street processions on this white horse.The story :
People in the region, who used to find their livelihood grazing and milking cows, found a particular cow returning without milk after a trip every morning. Surprised at this, they followed the cow and found that the cow stopped at a particular spot and let out the milk.On digging the mound, they found Lord Ranganatha beneath.

Delighted at this occurrence, they built mandapams around this place and constructed the temple for Ranganatha who is seen here as a Swayambu Murthy – one who came out of the earth on his own. Unlike other Ranganatha temples, where he is in a reclining posture, only the moolavar deity’s face can be seen.

Swami Ramanuja’s visit to Karamadai Ranganathar
Emperumaanar is said to have visited this temple on his way from Srirangam to Thiru Narayanapuram (Melkote).

Chariot Procession, that takes place on the full moon day in Maasi, is a special highlight at this temple 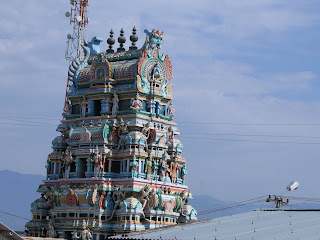 2. Buses every 5minutes to Karamadai from Coimbatore (Mettupalayam/Ooty bound)

3. By Car- can hire a tourist car from Coimbatore and back 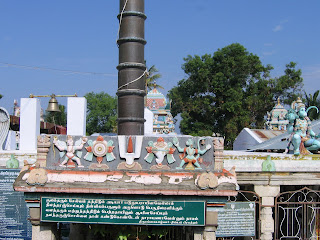