Situated a km off the Kanchipuram railway station, this Divya Desam has been designated as a heritage temple and is under the archeological survey of India.

The story goes that a Gandharva beauty tried to distract Baradwaja Rishi in his penance. A child was born to them and a perturbed Rishi prayed to Brahmma regarding the child’s up bringing. Vishnu and Brahmma came to his rescue and promised to take care of the child.

During the same period, a Pallava king, who was childless, was undertaking penance. They presented this child to the Pallava King and named him Parameswaran.

Another story goes that Lord’s security guards, Dwara Paalakaas, are said to have born to a Vidarbha king, who was childless. Later the two are said to have performed the Ashwamedha Yaagam, upon which Lord Vishnu is believed to have appeared before them.

To mark these event, Parameswara Pallava is said to have built this 3 tier structure. The 2nd tier is open only on Ekadesi days.The steps to the 3rd Tier are said to have been damaged during Pallava Times because of rains and hence cannot be visited anymore.

So attached was the Pallava king to this temple, that he used to invoke the blessing of this Lord before he embarked on any battle, especially before he went to face their arch rivals, The Pandyas. This has been brought out beautifully by Thirumangai Azhvaar in several of his Paasurams in praise of the Lord here.

Krishnadeva Raya, who contributed to the development of several divya desams, also helped in the renovation of this temple. 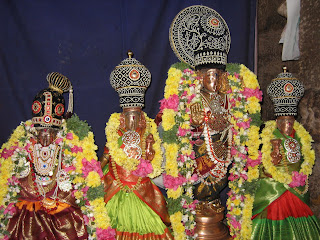 Artistic Pallava style Sculptures
The temple has beautiful old sculptures around the prakaram depicting the different stages of Parameswara’s life right from his childhood. The temple is a terrific example of Pallava Architecture and is believed to have been built by them on a single piece of rock.

Secret Underground Tunnel
Legend has it that there was a secret underground tunnel laid out from this temple all the way to Mahabalipuram , on the eastern sea shore, as well as to Parameswara Pallava’s court. When Britishers got a scent of this, they came here to trace this. Coming together as one, the devotees of this temple are said to have built out steps across the tunnel to the temple sannidhi, thus turning away the Britishers.

About 3 lakh people visit this temple during Vaikunta Ekadesi festival

Deity : Paramapatha Nathan sitting posture West facing
Lord Ranganatha can be seen in the 2nd tier
Paramapathanathan is said to reside in Tier 3