The temple that dates back to the Dwapara Yuga, finds reference in the Brahmanda Purana as ‘Mageesara Kshetram’. The temple’s prominence can be seen from the significant 1000year old inscriptions that one finds inside the temple.

Once when the entire Bhoologam was placed on one side of the weighing machine and Thirumazhisai on the other, they found that Thirumazhisai was heavier by one gram indicating the greatness of this sacred town.

At around the same time, Brigu Maharishi and Markandeya Rishi were invoking the blessings of Vishnu to provide them with a darshan of Madhyama Jagannathan. They were asked to go and undertake penance at Thirumazhisai, a place that is said to be equivalent to visiting two Divya Desams.

Pleased with their prayers, Madhyama Jagannatha Perumal provided the two rishis with darshan here at Thirumazhisai. To mark this event, one finds both the rishis inside the sanctum. 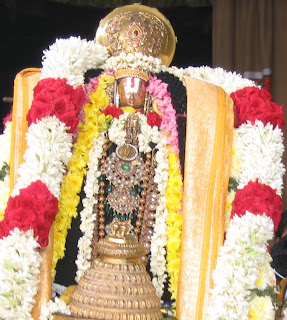 Born to Bhargava Rishi and Kanakangi in the Tamil Calendar month of Thai (Magam star), Thirumazhisai Azhvaar had a disfigured body at birth. Hence, his parents threw him into a Bamboo pit at Thirumazhisai (which is now a Mandapa to the west of the temple complex)

A childless couple – Thiruvaalan and Bangaya Selvi- picked him up and brought him up with love and care. The presence of Thirumazhisai Azhvaar brought back youth to the couple who then had a son by name Kanikannan.

Thirumazhisai Azhvaar spent his final years at Thiru Kudanthai and attained moksham there.

Thirumazhisai Azhvaar – Display of the Third Eye at this temple

To the left of the Jagannatha Perumal Sannidhi is the Thirumazhisai Azhvaar Sannidhi facing South. A special feature of the moolavar deity is that he is seen with a third eye.

He then asked for small thread that could keep rolling into the needle that he was using to stitch his torn clothes. Fuming with anger at this request, Shiva opened his third eye. Thirumazhisai Azhvaar invoked the blessings of Lord Narayana and immediately a third eye emerged for Thirumazhisai as well from the toe of his right leg with water rolling out to cool the fire raging from Shiva’s third eye.

Pleased with the devotion of Thirumazhisai Azhvaar, Shiva presented him the title of ‘Bhakti Saaran’.

Inscriptions indicate there was extensive renovation at this temple between 12th and 15th Century AD during the rule of Kulothunga Chola and Kopperunsinga among other rulers.

This place was referred to as Thirumazhisai Chaturvedi Mangalam as per the 12th and 13th Century inscriptions,

In the 13th Century AD, this place was referred to as Thirumazhisai Agaram

Temple Tank
There is a huge temple tank on the Eastern side of the temple that is currently brimming with water. 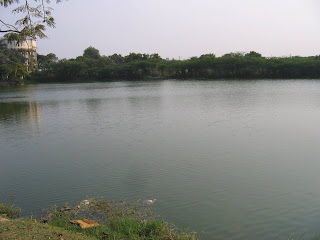 Thirumazhisai Jagannathan Perumal temple is located about 5kms from Poonamallee on the Thiruvallur-Tirupathi Highway.