There are many temples in and around tirupati. Here it is about some of the Temples that has some great legends behind them.

Many know about the Lord’s abode in sacred hills Tirumala and his consort Goddess Padmavati’s  in Tiruchanoor are most important places. Then Sri Govindaraja Swami Temple in Tirupati which was ordinate by Swami Ramanujar is also a another important temple.

Sri KodandaRama Swamy Temple, Tirupati – This temple, which was built by a Chola king during the tenth century AD, is situated in the heart of the Tirupati town. The presiding deities are 6feet tall elegant Lord Rama with his kondandam and mesmorising smile with equally beautiful and grace goddess Sita and Lakshmana. The temple of Anjaneyaswami, which is directly opposite, is a subshrine of this temple. According to legend, this temple commemorates the visit of Sri Rama to Tirupati on their way back from lanka.Also some folks says that the deities in this temple was installed here by Jambavan . This temple is located at the center of Tirupati (less than 2km distance from railway station or bus stand).

Sri Kalyana Venkateswara Swami Temple, Narayanavanam – The temple was built by Aakasharaja the father of Padmavathi thayar. In fact the Tirumala temple is also supposed to be built by him. Both the temples were later rebuilt by Krishnadeva raya.

Legend says Padmavathi thayar fell in love with Srinivasa Perumal and their marriage was conducted here in Narayanavanam. The main deity  is  Srinivasa Perumal in Kalyanakolam (as a groom) with kalyanakankam . Behind is the sannidhi for Sri Padmavathi dressed as a bride. Unlike tirumala here Lord is with thayar in same temple complex .Outside Thayar sannidhi shrine is a huge milling stone which is believed to have been used for preparing turmeric paste for the divine marriage. The temple is a beautiful one. There are other separate sannidhis for Sri Andal, Sri Ranganathar, Sri Sita Lakshmana Sameta Ramar.

Narayanavanam is a quaint village about 35 kms from tirupati and 95 kms from Chennai on the Chennai tirupati road. It is just 5 km away from puttur.When you reach Puttur bypass you will find the road to nagalapuram / uthukottai branching off on the right . Proceed for about 2 kms and you will enter the village. After about 2 furlongs you can see the road on the left leading to the temple. 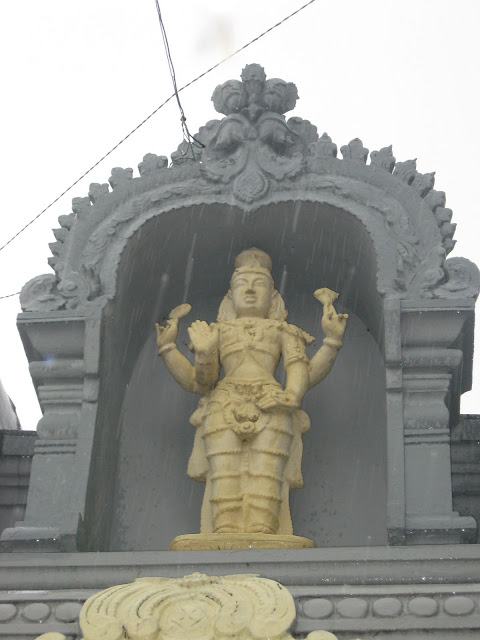 Sri Prasanna Venkateswara Swamy temple ,Appalayagunta – Appalayagunta is the only temple around Tirupati where the Lord is shown in ‘Abhaya Hasta posture’, which means that his right hand is raised in a blessing gesture. Normally, Lord Venkateswara is depicted with his right hand pointing downwards to his thiruvadi. It is believed that at Appalayagunta, after marriage with goddess padmavati ,Lord blessed the sages who had gathered for his marriage, and hence his hands are in a blessing posture. the temple premises also have a separate shrine for Goddess Padmavathi, Anjaneyaswami and Sri Andal also.

Appalayagunta is located 14 km from Tirupati and near 3 km from vadamalapet.

Sri Kalyana Venkateswara Swamy, Srinivasa Mangapuram – The deity here is the replica of the main diety Lord venkateswara in Tirumala. After marriage Lord visited Sage Agastya here. As requested by the sage the Lord stayed here for six months before proceeding for  the tirumala hills. The Lord here is said to the varaprasaadi for all who has facing obstacles/delay in marriage. The other Foot path to Tirumala Hills SriVari mettu is 6km from here. This foot path is shorter but bit tough compared with the Alipiri Route.

Srinivasa Mangapuram is 12km from tirupati in chandragiri route. 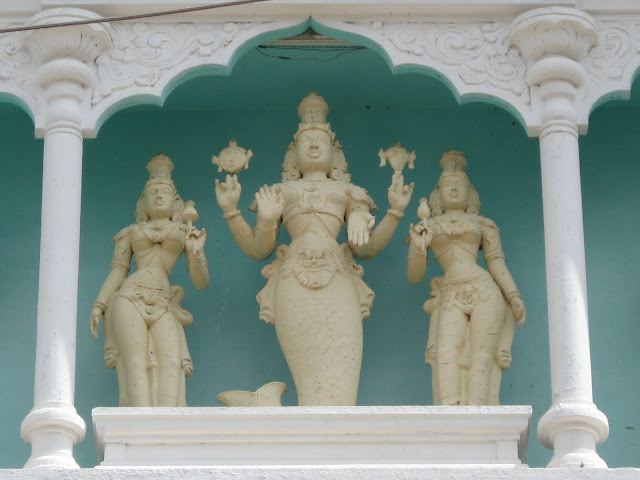 The main deity is Veda Narayana Perumal, since He is believed to have rescued the Vedas from the demon Somakudu. The lord is seen here in along with his consorts Sri Devi and Bhu Devi and in one of his hands holds the Sudarshana Chakra in prayoga (ready for release). There are other sub shrines too, one dedicated to the goddess as Vedavalli, as well as shrines dedicated to Lord Rama as well as Hanuman.

The rarity of this temple is the Surya’s Pooja to Lord which happens annually during the temple’s Brahmotsavam  On Sukla Dwadasi, Trayodasi and Chathurdasi days of Tamil month Panguni which is approximately around last week of every March.

On the above 3 days one can witness the Sun’s rays from the horizon, entering the sanctum from the main gopuram entrance and falling at the Lord’s Thiruvadi on the first day, Naabhi (Navel) on the second day and Forehead on the third day, during the sunset (around 6 – 6.15 pm), as the Lord here is facing towards west. The deity is about 600 meters from the main Gopuram entrance and the Sun’s rays have to pass through such a distance to fall directly on the deity which has been happening for ages from now. This event signifies Sun God’s (Surya) Seva to the Lord to warm up his chilled body, as the Lord has been under water for many years during his war against Somukasura.

Nagalapuram is about 70Km South East of Tirupati and 90 Km North of Chennai. If traveled from Chennai, Nagalapuram is situated about 15 kms from Uthukkottai on the highway towards Puthur, after Suruttuppalli.

Sri Venu Gopala Swamy, Karvetinagaram – The deity here is Venugopalaswamy – a form of Lord Krishna. He is seen here, standing in front of a cow, holding a flute in his hands and a pot of butter at his feet. Interestingly, he is accompanied by  Rukmini and Satyabhama. This is interesting because this form of the Lord is connected with his childhood antics. Rukmini and Satyabhama appear in the later stages of his life, and usually have no place in such a depiction!

Karvetinagaram, located about 48 Km from Tirupati (near Puttur).

There are frequent buses to all these temples from Tirupati Bus Stand. also one can hire auto to cover all these places.

All the above temples are under TTD.

The TTD runs a Package trip bus daily to all these temples (includes one or two other temples). The bus starts from Srinivasam Complex at 8:00AM and returns around 5:00PM.

More details about the bus can be had from the reception at the Srinivasam Complex or at any information centers of TTD. There is no advance reservation, and seating is on a first come first served basis