Anjaneya carried the Saligrama stone which turned here into a mountain, Ranganatha is seen in a ‘Karkodaya’ Sayana Posture 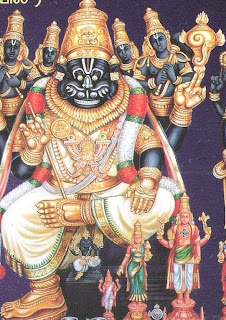 The Story
Given the urgency of the situation, Lord Vishnu had to make a sudden trip to slay Asura Hiranya. He embarked on this mission, on his own, without Goddess Lakshmi and Garuda. Having missed the Narasimha Avatar, Goddess Lakshmi requested him for a darshan of the Lord as Narasimha. She was asked to chant the Thiru Mandhiram at Kamalalayam banks.

At the end of the Ramayana, Anjaneya went to place the Sanjeevani Mountain back at its original location. After doing so, he found the sacred Saligrama stone on the banks of Kantaka River. On his way back, he stopped by at the Kamalalaya Pushkarni to perform his morning prayers. Finding Goddess Lakshmi undertaking penance here, he placed the Saligrama on her hand and went ahead with his prayers.

A little later, after his prayers, Anjaneya came back to find the Saligrama missing from her hands. Goddess Lakshmi told him that she found it too heavy to hold and hence had placed it on the ground only for it to turn into a Saligrama mountain.

Being the one who carried the huge Sanjeevani Mountain, it would not be too much of a task for him to carry the Saligrama Mountain as well, she said. As per her direction, Anjaneya unleashed his tail to pick up the Saligrama Mountain only to find a sparkling light emanating from the mountain. It was Lord Vishnu providing darshan, in his Narasimha posture, to both Mahalakshmi and Anjaneya.

Since Anjaneya brought the Saligrama to this place and helped create this place, Lord Narasimha asked him to remain here facing the Saligrama hill. Anjaneya is in Digambara temple (with sky as the roof) facing and worshipping Lord Lakshmi Narasimha and the Saligramam. The Anjaneya in this kshethra is eighteen feet tall and is having dharshan of the Lord Lakshmi Narasimha about 250 feet (76 m) away. The eye of Anjaneya is in straight line with the thiruvadi [lotus feet] of Lord Narasimha. One can witness Anjaneya having the dharshan of Lord’s Lotus feet from the Garudazhwar sannathi. The imprint of the footsteps of Anjaneya Swami is seen in the Kamalalam tank steps 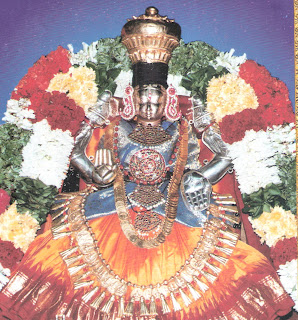 As Goddess Lakshmi undertook penance here by chanting his ‘Naama’ (On Namo Narayana’) and the hill was created after she placed the Saligrama on the ground, Lord Narasimha named this hill as ‘Naama Giri’ and referred to her as Naama Giri Thaayar. Given her contribution to this place, he gave her the first priority at this temple. Devotees are to first visit Naama Giri Thaayar before they enter the Narasimha Sannidhi.

Inside the Sanctum
At the Narasimha Sannidhi, one finds Narasimha in the middle flanked by Shiva on his right and Brahmaa on his left. Also, inside the sanctum are Sanaka and Sanaathana, Brahmma’s sons. One finds Surya and Chandra fanning Lord Narasimha.

Next to Narasimha inside the Sanctum are sculptures of Vaikunta Narayanan, Hiranya Samharam, Vamana, Trivikrama andVaraha, all said to be 13th Century work of the Pallavas. 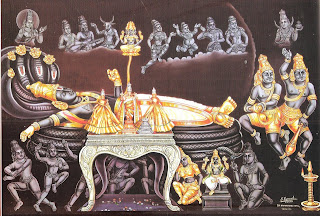 To the East of the hill and behind the Narasimha Temple is the Ranganatha temple, where Lord Ranganatha is seen in a special Karkodaga Sayana Posture with his head resting South and his feet directed towards the North.

King of Snakes ‘Karkodagan’ undertook penance here and requested the Lord to rest on him. Hence, the posture here of Lord Ranganatha is referred to as Karkodaga Sayanam. While he is seen sleeping on top of the Snake, a unique feature here is that the face of the Snake Karkodagan is that of a roaring lion.

There are three entrances to the Ranganatha temple. The entrance in the middle is the one that is opened every day, while the other two entrances are opened only on Vaikunta Ekadesi day. One has to climb 100 steps to reach the sannidhi.

On the occasion of his Thiru Kalyanam, Devas wanted to feed Thirupathi Srinivasa, who referring to this place as ‘Mel’ Ahobilam, asked them to feed the Lord here. Hence, presenting Thaligai to Lord Narasimha here is very special and is equivalent to feeding Thirupathi Lord Srinivasa.

The four Saturdays of Puratasi are special at this temple

How to reach Namakkal
Chennai-Salem Yercaud Express(Salem arrival 5am) or Chennai Egmore-Salem Express (Salem arrival 6am)
Direct Trains also from Coimbatore and Bangalore to Salem
From Salem, one can take a one hour bus trip to Namakkal
Buses every 5minutes from Salem