The first Divya Desam to be praised by the Azhvaars
The story of ‘Place for one to sleep, two to sit and three to stand’ 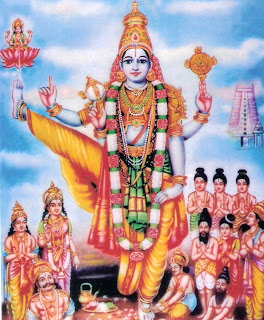 Located about 40 kms West of Villipuram in the South Arcot district of Tamil Nadu on the banks of Pennai River (Krishna Bhadra), the Ulagalanda Perumal temple in Thiru Kovilur dates back to a period before the four Yugams. At the Thiru Kovilur Divya Desam, one finds several interesting inscriptions dating back to the Pallava, Pandya and Chola periods.

The 11 storied 192 ft high Eastern temple Tower is one of the tallest temple towers among the Divya Desams. The gigantic Lord Trivikrama measuring over 20 ft in height is seen in a grand standing posture with the left foot on the ground and his right leg raised 90 degrees to his right and with the conch in his right hand and the chakra in his left.

Naalayira Divya Prabandham’s first verses were composed here
The first three of the Azhvaars-Poigai, BhoothathAzhvaar and PeyAzhvaar- came to ThiruKovilur on a rainy night. First to reach was Poigai Azhvaar, of Kanchipuram, who sought refuge for the night at the ashram of Mrugandu Rishi, who told him there was place for just one person to sleep and that he was welcome to sleep here for the night.

BhoothathAzhvaar, from Mamallapuram, followed shortly and he too requested that he stay at the ashram for the night. PoigaiAzhvaar welcomed him saying there is place for one to sleep and two to sit and took him inside.

PeyAzhvaar, from Mylapore, too reached the ashram. He was told that there is place for one to sleep, two to sit and three to stand. The three of them stood there through the night sharing their experiences.

This is the first temple where the first three Azhvaars sung praise (Paasurams) of Lord Vishnu, the composition of which later came to be called the Naalayira Divya Prabhandham.

It is believed that this ashram where the 3 Azhvaars stayed that rainy night is the one where one , today, finds the sanctum. The first of the three Azhvaars also find a place inside the Sanctum.

Vaamana Avataaram displayed again
Mrugandu Rishi, who had missed the Vaamana Avataram, is said to have undertaken penance here at Thiru Kovilur. Pleased with his prayers but wanting to test him more, Lord Vishnu visited his ashram disguised as an old hungry Brahmin. With no food at his ashram, Mrugandu requested his wife to organize food from somewhere. Finding no place to go, his wife offered prayers to Vishnu and sought help from the Lord, so the Brahmin does not leave their ashram in the hungry state.

Happy with their commitment of not letting go a hungry Brahmin, the Lord filled the vessels with food, much to the surprise of the Rishi. When the happy couple came out to offer the food to the Brahmin, they found Lord Vishnu standing there displaying his full form –with conch and chakra. Delighted at this sight, the Rishi requested the Lord to display his Vaamana Avataaram at this place and to stay put at Thiru Kovilur.

Parasurama and Agastyar are said to have penanced at ThiruKovilur. Arjuna is believed to have taken bath at the Pennai River and then undertaken penance here. 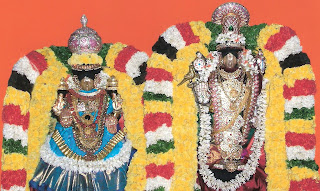 The Azhvaars have described the Lord in a few beautiful verses
Poigai Azhvaar’s praise of the Lord at Thiru Kovilur:

The administration of the temple is under the control of Thiru Kovilur Sri Emberumaanar Jeer.

From Madras, one can also take a train to Villipuram (2 ½ hours) and then a bus from Villipuram to Thiru Kovilur( 1 hour) 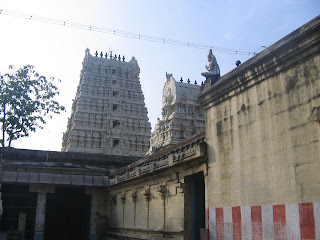