Gigantic Ranganatha is bigger than the Lord at Srirangam
Located about 60kms South West of Villupuram on the banks of the now completely dry South Pennai river is Adhi Thiruvarangam, an almost unknown and yet, one of the oldest temples for Lord Ranganatha.

This temple dates back to the first Yugam (Kretha Yugam) and the first Avathaaram (Matsya Avathaaram). Hence, this Kshetram is referred to as ‘Adhi’ Rangam.

Lord Ranganatha is seen in a gigantic east facing sleeping posture and measures over 15feet, not seen in any other Divya Desam. 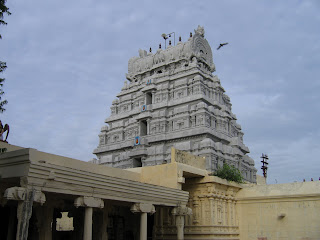 There are three stories that describe the significance of this temple.

1. The Devas, who lost the Vedic scriptures after being defeated by Asura Shomugan, approached Brahmma who in turn sought the help of Lord Narayana.

Finding out the hide-out of the Asura under the sea, Lord Narayana took the form of Matsya and defeated the Asura and handed back the Vedic scriptures to Brahmma. It is believed that the Lord initiated the Vedic lessons to Brahmma in this Kshetram. One sees the Lord with his left thumb folded towards his fingers in a posture indicating this.

Acceding to the prayers of the Devas, Lord Narayana is said to have directed his sculptor Vishwakarma to create an image of his similar to the one in Thiru Paarkadal.

2. In Kretha Yugam, a king by name Suratha Keerthi lived a prosperous life but he had one unfulfilled wish. He did not have a child. As suggested by Sage Narada, he came, with his wife, to the place where Lord Ranganatha was sleeping under Adhiseshan and undertook penance. Answering his prayers, he was blessed with four children.

3. Chandran, who showed love to only one of his 27 wives, was cursed by his other wives to lose his handsome looks. He came to Uthara Rangam, undertook penance in the temple tank to the South East of the temple and was liberated from his curse. Hence, the pushkarni here is called Chandran Pushkarani.
Lord in a South – North Sleeping Posture
Lying in a sleeping posture from South to North, Lord Ranganatha has his head on the lap of Sri Devi-on his left, while his left leg is stretched towards Bhoo Devi seen at his feet. To his right is Garuda ever ready to be of service to the Lord.

This is a Prarthanasthalam for: 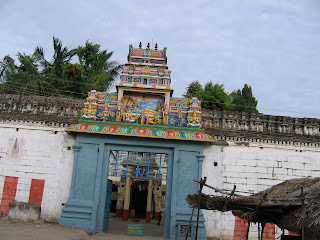 Temple Time : 6am-8pm (does not close for lunch)

How to reach Adhi Thiruvarangam

Manalurpet- Adhirangam-5kms (mini buses- local buses ply here every half hour-
One can reach the Northern banks of the temple and cross the Pennai river to reach the temple. There are also buses that reach the Southern side of the temple, in which case there will be no need for one to cross the river)