Located about 16kms North East of Mysore off the Bangalore- Mysore Highway on the banks of the Cauvery is the Lord Ranganathaswamy temple in the island town of Srirangapatna. Lord Ranganatha is seen in a reclining posture referred to as Yoga Sayanam. This is one of the important Swayambu Ranganatha Kshetrams.

The Story
The devotees cleansed their sins by bathing in the sacred Cauvery. With even Ganga coming here once a year, Cauvery accumulated all the sins and was stuck with a dosham and took on the ‘Rakshashi Roopam’.

To rid herself of this, she undertook penance and sought the help of Lord Vishnu. Pleased with her prayers, he came down to this place. Delighted at the darshan of Lord Ranganatha, Cauvery undertook service at the feet of the Lord and was immediately relieved of the sins. Hence, to this day, one can see Goddess Cauvery at the feet of Ranganathaswamy at this temple.

Another story goes that Gouthama Rishi, who wanted darshan of the Lord, undertook penance at this place. Lord Ranganatha is said to have displayed his special ‘Yoga Sayana Kolam’ to the Rishi. Hence this place is also referred to as Gouthama Kshetram.

A special feature at this temple is the large granite pillared structure of Garuda, the credit for which also goes to the Vijayanagara rulers who were great devotees of Vishnu.

Construction
The sanctum of Lord Ranganatha is said to have been built by Ambi, a dancer, about 3000 years ago.

The temple itself was built much later, in the 9th century AD, by Thirumala Raya. During course of time, the temple has seen renovations and improvements thanks to the efforts of the Hoysala and Vijayanagara rulers More recently the Wodeyars of Mysore, Hyder Ali and Tipu Sultan had also contributed to the temple. 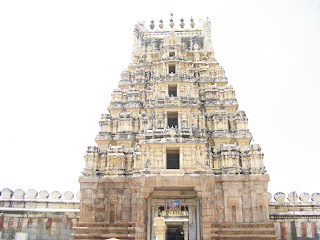 The Ranganthaswamy temple has a mix of chozha, Vijayanagara and Hoysala style of architecture. The temple tower that one sees on the Eastern side was built during the Vijayanagara rule. One can see different forms of Vishnu at this entrance.

Opening of Swarga Vaasal on the Pongal day (at this temple, the opening is on the first day of Utharaayina period) 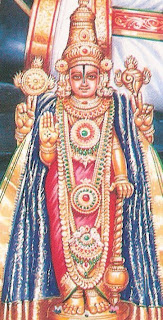 How to reach Srirangapatna

Buses every 5 minutes between Mysore and Srirangapatna

Srirangapatna is about 120kms from Bangalore on Mysore Highway